A Hen Harrier past Selsey Bill was an excellent surprise on Sunday, a Bill tick and #194 on the Peninsula for me this year...expletive laden, joy-filled video to follow!
Posted by organicbirder at 12:39

Two good birds for me in the last couple of days. On Saturday I found the first Selsey Peninsula Wryneck of the year at the Severals, Church Norton, surely the most reliable spot in Sussex for the species! Enjoyed by many, I'm pleased to say.

On Monday I decided a change of scene was well overdue so I went early for the Eastern Olivaceous Warbler at Farlington. The bird showed reasonably well, but not often (nice schnoz on it!) and apparently much better views were had later in the day. Might well go back for a pic if it stays a bit longer but nevertheless it was nice to twitch something away from Selsey; I shall be glad when this year draws to an end so I can once again expand my horizons but such is the yoke of patch year-listing!! (192 on Selsey Peninsula this year so far...) 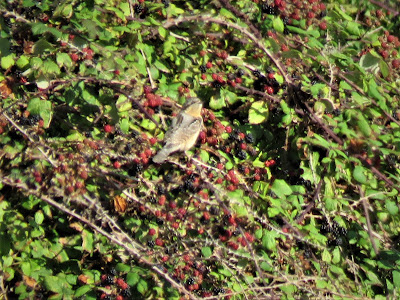